Making a Difference in the Lives of Children with Cancer

This month, we have highlighted the efforts of the East End Group in the community. As a way of showing our gratitude for our business success, we have made supporting charitable efforts in the community a strong focus for our team. Our work with the Michael Magro Foundation is one of our most important alliances.

Founded more than seventeen years, Terrie and Paul Magro and a small army of dedicated volunteers have been raising money to support families in crisis due to a child diagnosed with cancer or other catastrophic illness. Since illness never takes a holiday, there are always families in need. For co-founders, Terrie and Paul Magro, who lost their son Michael after a valiant battle with cancer, supporting other families in need [in Michael’s name] is their purpose. The organization has grown in its work every year. They pay household bills, transportation costs to and from treatments, even rare evenings out so that families turned upside down when their child/sibling was diagnosed, and more. They are there to support all of the costs that are not covered by insurance. They understand that two-income families often lose an income so that a parent can stay home with their ill child. And, having been there themselves, they are there to support those families through the turmoil that IS childhood illness.

Throughout the Covid-19 pandemic, the Foundation expanded its reach. What was once an organization serving Long Island, New York City, and the west coast of Florida, has expanded throughout Florida, California, Texas, and Oregon, with new states coming on board. The need is real, so the fundraising efforts have grown. 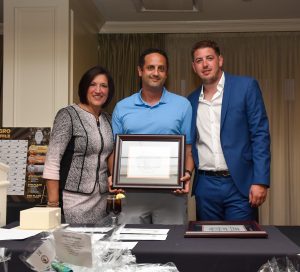 In 2021 Ryan Dempsey, Managing Partner of East End Group and a true friend of the Foundation was selected as the honoree for the Michael Magro Foundation’s annual golf outing. As people began coming back to special events, they were eager to support Ryan as he was honored for his efforts on behalf of the Foundation. The outing was a resounding success, raising nearly $300,000. Ryan was presented with a special citation from a local legislator who noted that Dempsey “leads by example” and is “engaging the next generation of philanthropists in the region”.

East End Group continued its support of the Michael Magro Foundation this year as a sponsor of the annual golf outing, Aloha Evening on the Beach, Evening of Tasting gala, and other events that raise funds in support of the Foundation’s programs. Further, Ryan has become a member of the Board of Directors, helping to ensure the long-term sustainability of the organization. He brings his business expertise and his many business connections to the organization, as well as the support of the East End Group. It is the hope of the entire East End team that these efforts will go a long way toward making sure in these families and children in need receive the assistance they need.